Cycling North along Westbury Road (A4018) on a shared-use pathway beside the main carriageway there is a sign to "Westbury Park Shops". It is about 50 yards before the Parry's Lane roundabout and indicates a right turn ahead for cyclists and pedestrians. It has been added to a larger sign that reads "New Road Layout".

In practice, on arrival at the roundabout there is no indication before, on or after the roundabout as to where cyclists should go next. A zebra crossing before the roundabout offers a dismounted route to the other side of the road, but there is no indication of which direction to take thereafter. There are 4 roads to chose from, Westbury Park, Etloe Road, North View and Downs Park West but none of them seem to offer shops. There are two ambiguous cycle lane markings on the entrance to Westbury Park and "NO CYCLING" is painted on one footpath.

The problem, in a nutshell, is one that recurs all over Bristol: if you don't already know the way a first encouraging sign gives expectations that are not followed through. A route that had been indicated as a cycle route (with the cycle symbol) at its origin is left to chance and guesswork. The effect on cycling is to increase uncertainty and unpredictability. Each cyclist is obliged to make guesses about how to use a junction or follow a route. An association of cycling with expert and arcane knowledge is reinforced. Many routes (including this one) could be improved with a few additional signs or road markings and their use by casual or less well-informed cyclists could be encouraged. 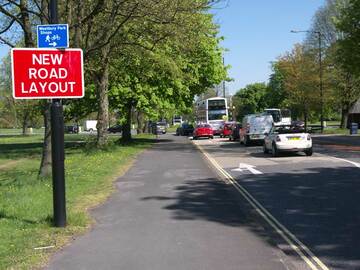 Please wait…
Back to top